“Good friends, good books and a sleepy conscience: this is the ideal life.”

January 12, 2021: Kitty Wintrob (née Simmonds), was born and raised in Britain’s east end of London. She was one of 1.5 million children evacuated to the British countryside at the start of the Second World War in 1939. The British Government of the time fearing the lives of the country’s children established an evacuation plan. Entire schools were evacuated to the countryside.

Nearly 50 years ago Kitty sat down ostensibly to write a memoir just for her family, her story as a 10-year-old evacuee, which resulted in time in an appealing published memoir for both adults and children titled, I’m Not Going Back: Wartime Memoir of a Child Evacuee.

Since it was first published eleven years ago, and now into its second edition, Kitty and Ralph, her husband of 60 + years, have developed a Burns and Allen team of sorts, establishing a series of book talks in synagogues, churches, schools, libraries and seniors’ homes in their home town of Toronto and in Sarasota, Florida and in Jerusalem. 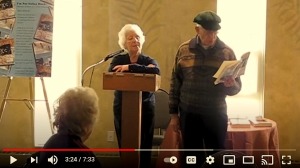 Kitty’s memoir takes the reader through her experiences, living first in Britain’s countryside with a childless family who made her earn her keep by cleaning and polishing the floors before school, and next in a wealthy home, where she was told to eat with the maid, in addition to which the couple’s daughter would not speak to her because she was an evacuee. Kitty explains in her memoir she is stunned at the hardships she has to endure from her foster parents as she struggles to maintain her Jewish identity in a world where they had never seen a Jew before.

In both cases, Kitty Simmonds, a spirited girl with unruly hair and steadfast pluck, not yet in her teens, ran away and fled home to war-torn London to be with her mother.

I’m Not Going Back: Wartime Memoir of a Child Evacuee by Kitty Wintrob is available to purchase both as an eBook and paperback on Amazon sites and on Bill Gladstone Genealogy

cjnonline.ca Community Jewish News is a member of the JewishinfoNews.com group

Canada: A National Summit on Islamophobia – More of What’s Failed?